It’s December, and I want to wish you all the very best for the upcoming break. Here’s a special small gift for you, it’s the story of:

How I Bought A Picture of Pak Tai Temple

(Before I even knew what it was.)

Hong Kong has an annual tradition of having a ‘White People’s Christmas Market’ at one of the fancy hotels. It still happens, here’s a pic of the ad for this year’s one at the Conrad, a hotel that charges over a thousand US a night per room. I haven’t linked back to the article because it will disappear soon anyway. 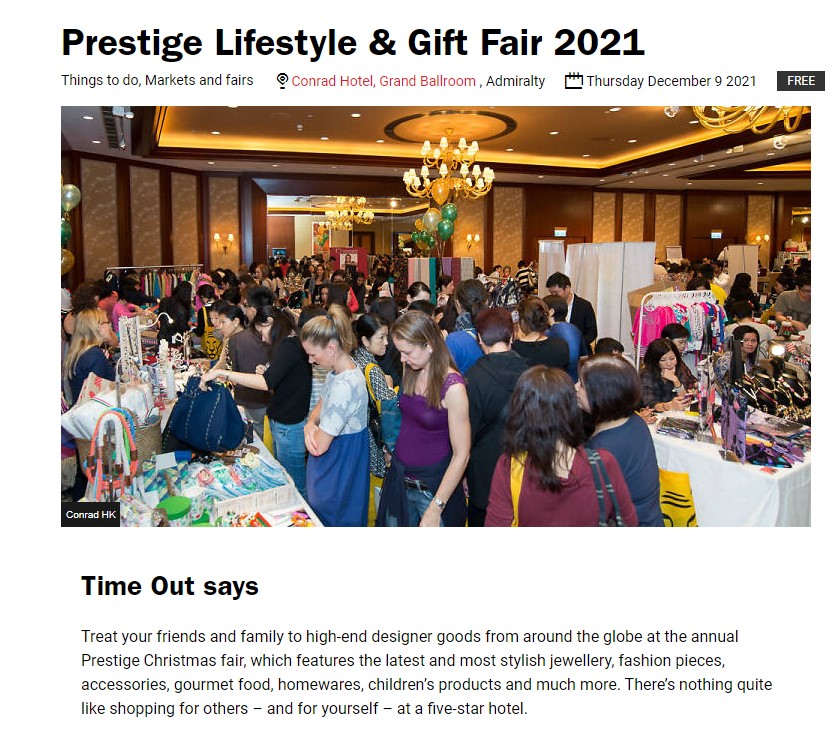 And yes, it’s just the same sort of stuff that you’d find at any market anywhere in the West, there’s nothing special here (or so I thought). Blown glass trinkets, leather bags from China, massively overpriced silver and dyed freshwater pearl jewellery, silk and fake pashmina scarves, that sort of thing.

And then I found one stand that had framed hand-coloured etchings on the walls of their booth, and a box stacked with the etchings framed in board and wrapped in plastic, with a label underneath of the date and subject, each of them for about HK$500 ($AUS100). I flipped through them and this one jumped out at me: 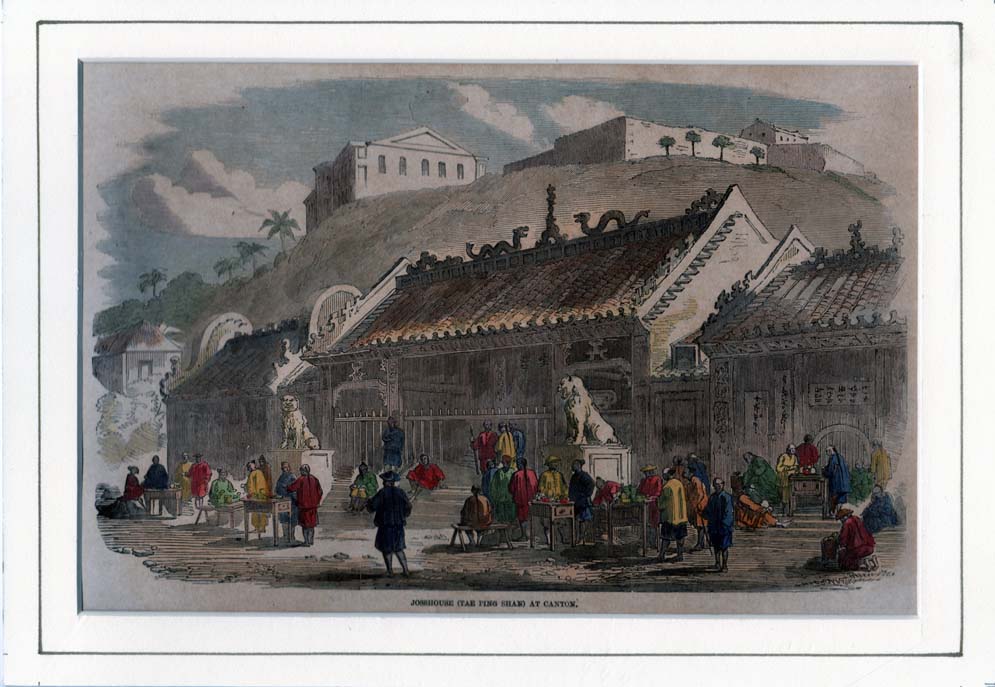 The title on the etching is ‘Josshouse (Tai Ping Shan) in Canton’. It was obviously originally black-and-white, and I suspected that the stallholders had gone over it with some watercolours to jazz it up a bit.

Victorians called temples ‘Josshouses’, ‘Tai Ping Shan’ is specifically the Peak (but all of Hong Kong, really), and ‘Canton’ is Guangdong Province.

There was a label stuck to the back of the plastic folder, and it said this: 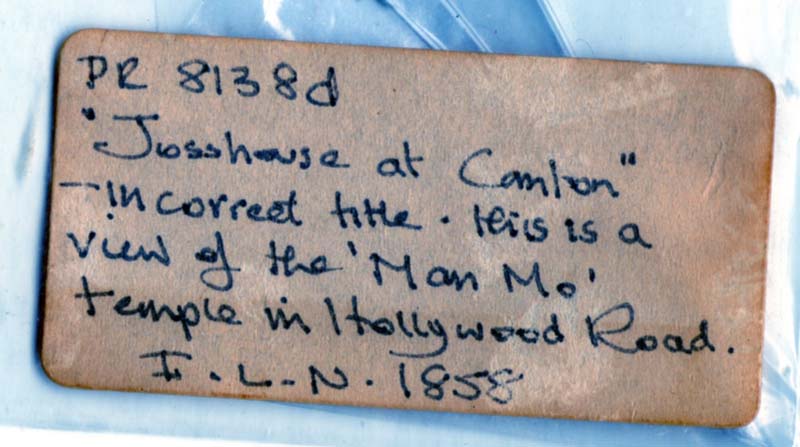 At the time I thought ‘Huh. Man Mo Temple looks nothing like that’ but I liked it so I kept it in the plastic folder and used some blu-tack to stick to the wall of my office.

Here’s a current photo of Man Mo Temple, you can see that it’s not one big building flanked by two smaller ones, as shown in the etching:

(Copied from Google Maps. The link for the streetview is https://goo.gl/maps/NK8P8APtVpXEiVwf9.)

So when I returned to Australia, and started writing Dark Heavens, I hit the bit where there’s the Pak Tai Temple on Cheung Chau, so I wiki’d it and stared at the image:

The thing that really makes the difference for me is the hill off to the left, with the house on it, just like in the etching. Man Mo temple is built into the side of the hill and doesn’t have that.

I looked it up on google maps, and it definitely looked like the same place.
https://goo.gl/maps/Wche7uPNUdLC9UYw6

(Back when I was doing the research, there wasn’t much on Google Maps about it. Now you can do an internal tour of the temple and see inside!)

So I went down the research rabbit hole to find out what I.L.N. 1858 is, and it started to get even more interesting. I thought I just had a cheap reproduction of an original 1858 etching or something, because the paper is trash, but my picture really is that old, and the people who are selling these pictures are MONSTERS.

I.L.N. was the Illustrated London News, a weekly newspaper that was the first in the world to include pictures. The pictures are engravings, and they sent artists around the world to provide them before the era of easy photography. It was printed from 1842 until 2003, and the company – Illustrated London News Ltd. – is still around. My ‘etching’ is a picture cut out of the paper and coloured. The people selling them in the market obviously have a stack of these priceless historical newspapers and they’re cutting them up.

As I said, monsters. 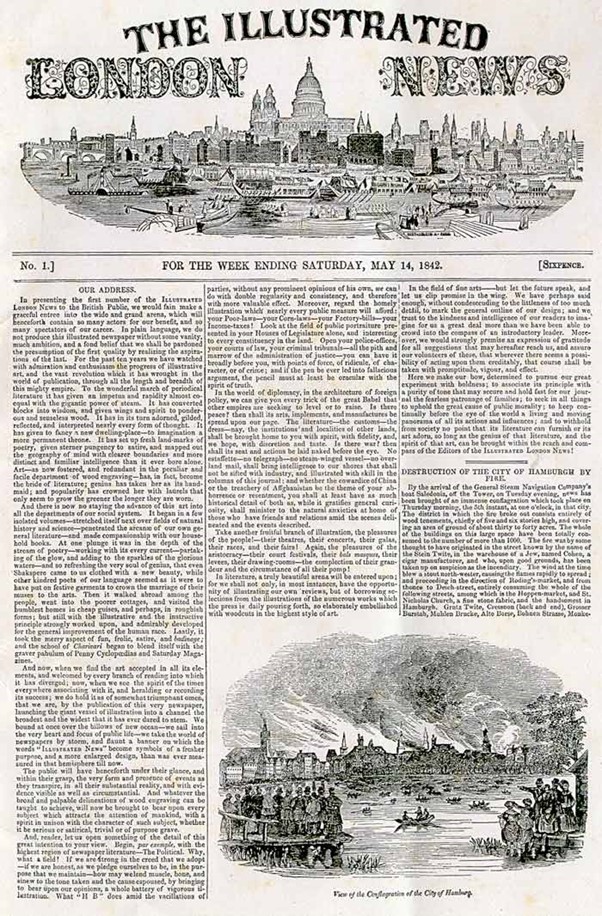 First issue of the ILN, from Wikipedia.

So when I went back to Hong Kong in 2004 to visit family, I made the trip out to Cheung Chau to take some photos of the temple. It was the middle of summer and the kids hated being out in the humidity and refused to come with me, so I went by myself.

Here’s the photo I took: 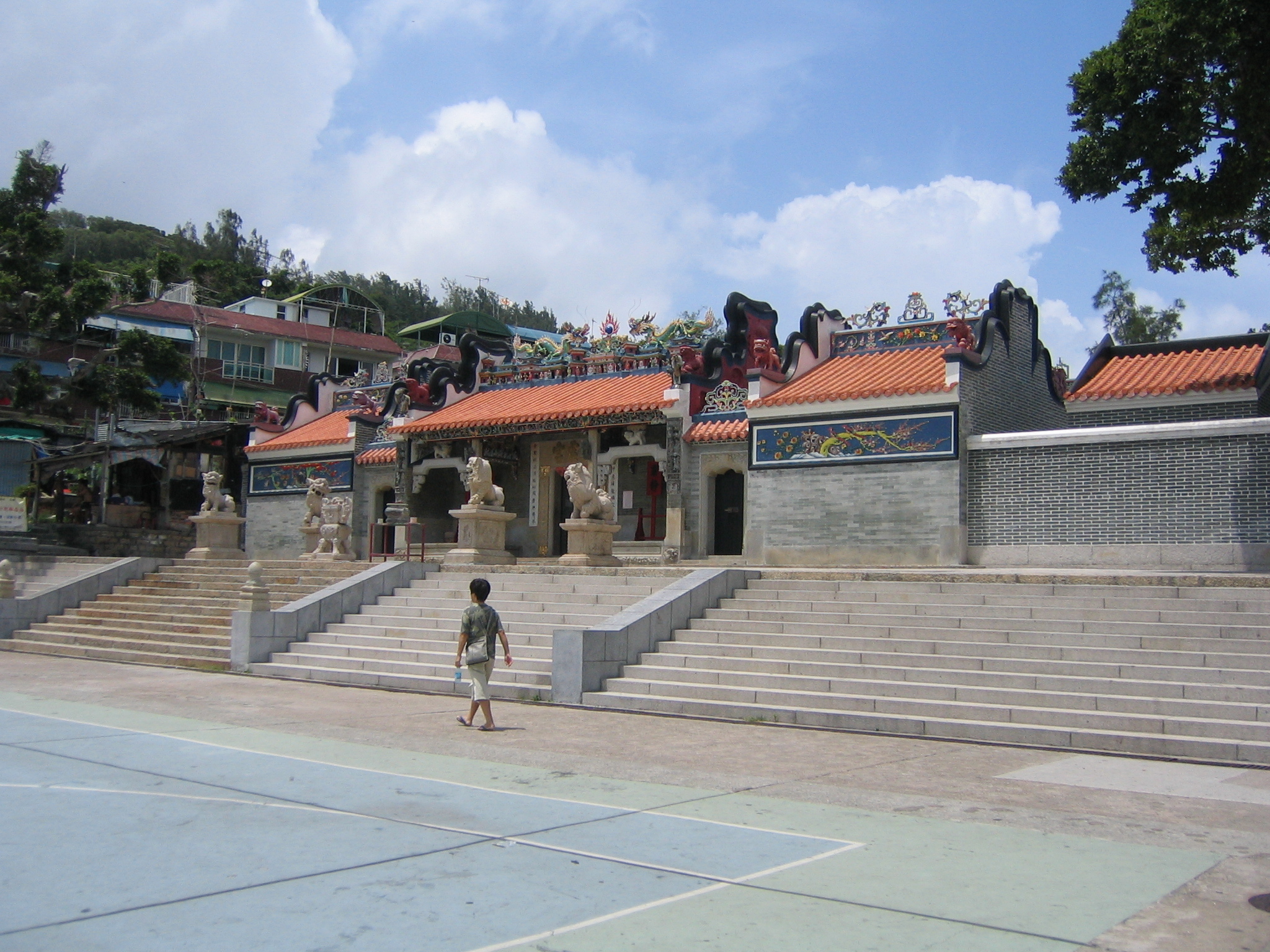 I put it side-by-side with the ILN page, and yep, I’m sure that’s it. I had a picture of John’s temple for years before I even considered writing the books.

I finally bought a frame for it after owning it for more than ten years, and carefully pulled it out of its cardboard backing. Here’s the back of the newspaper page: 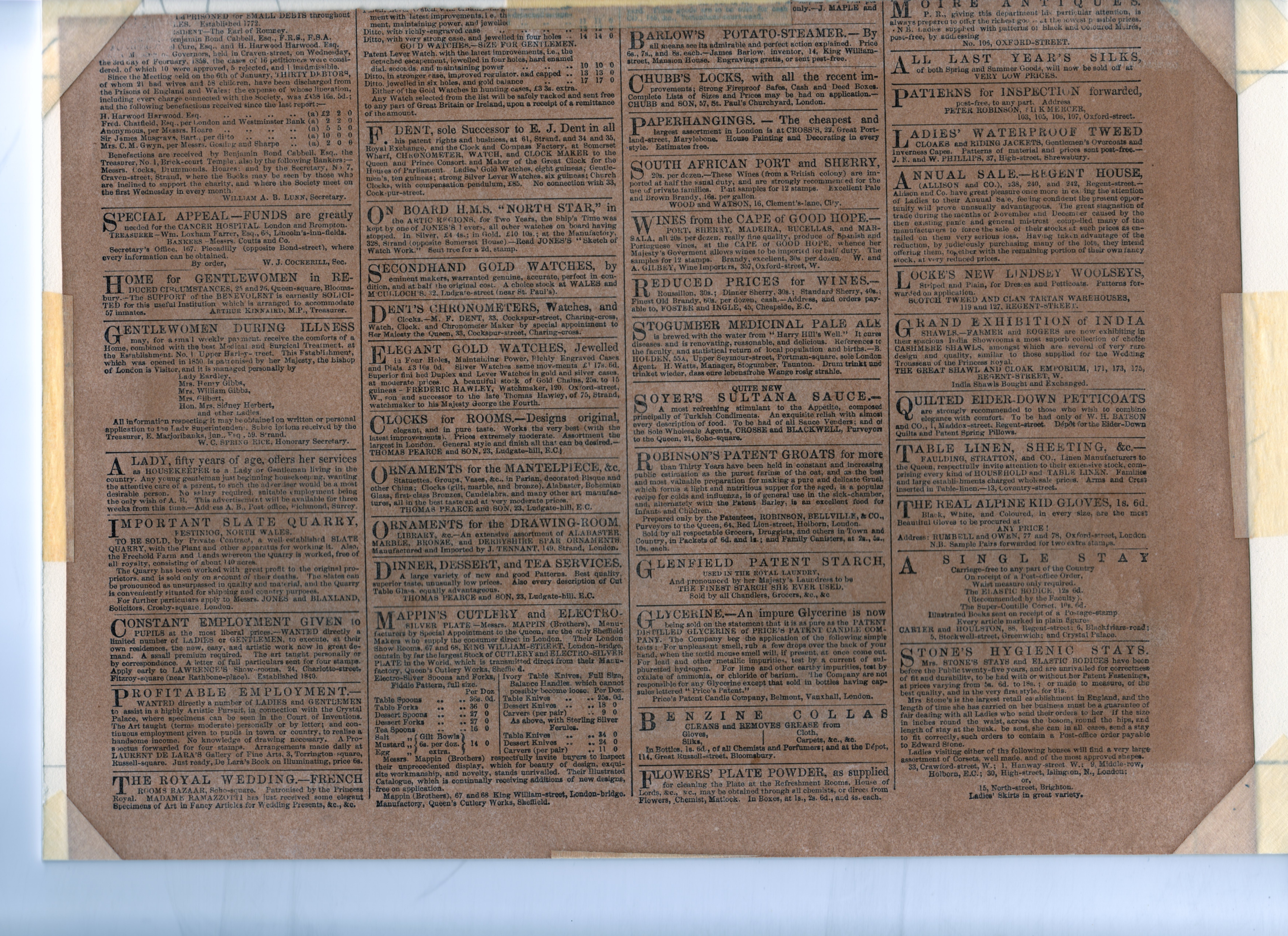 When I was studying at the University of Queensland, I discovered that they had bound copies of the original I.L.N. newspapers, stored and cared for, not cut up, and looked after like these treasures should be. I went through the collection, and found it! The newspaper that had my picture in it. I popped it over to the photocopier and took some copies of the page.

Later I discovered that I.L.N. has been completely digitised, and all the issues are available for perusal online. The State Library of Queensland has an article about it, it’s one of their librarian’s favourites.

I downloaded my newspaper, and here’s the page that contained my picture: 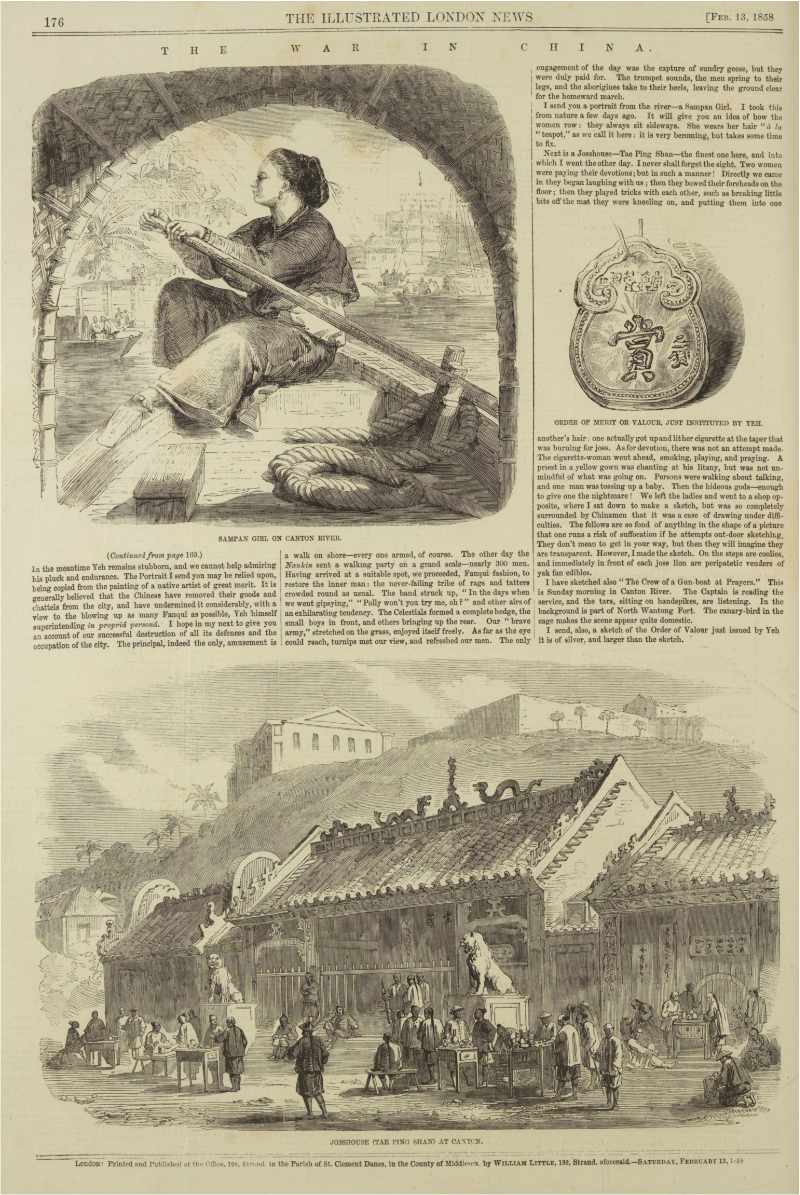 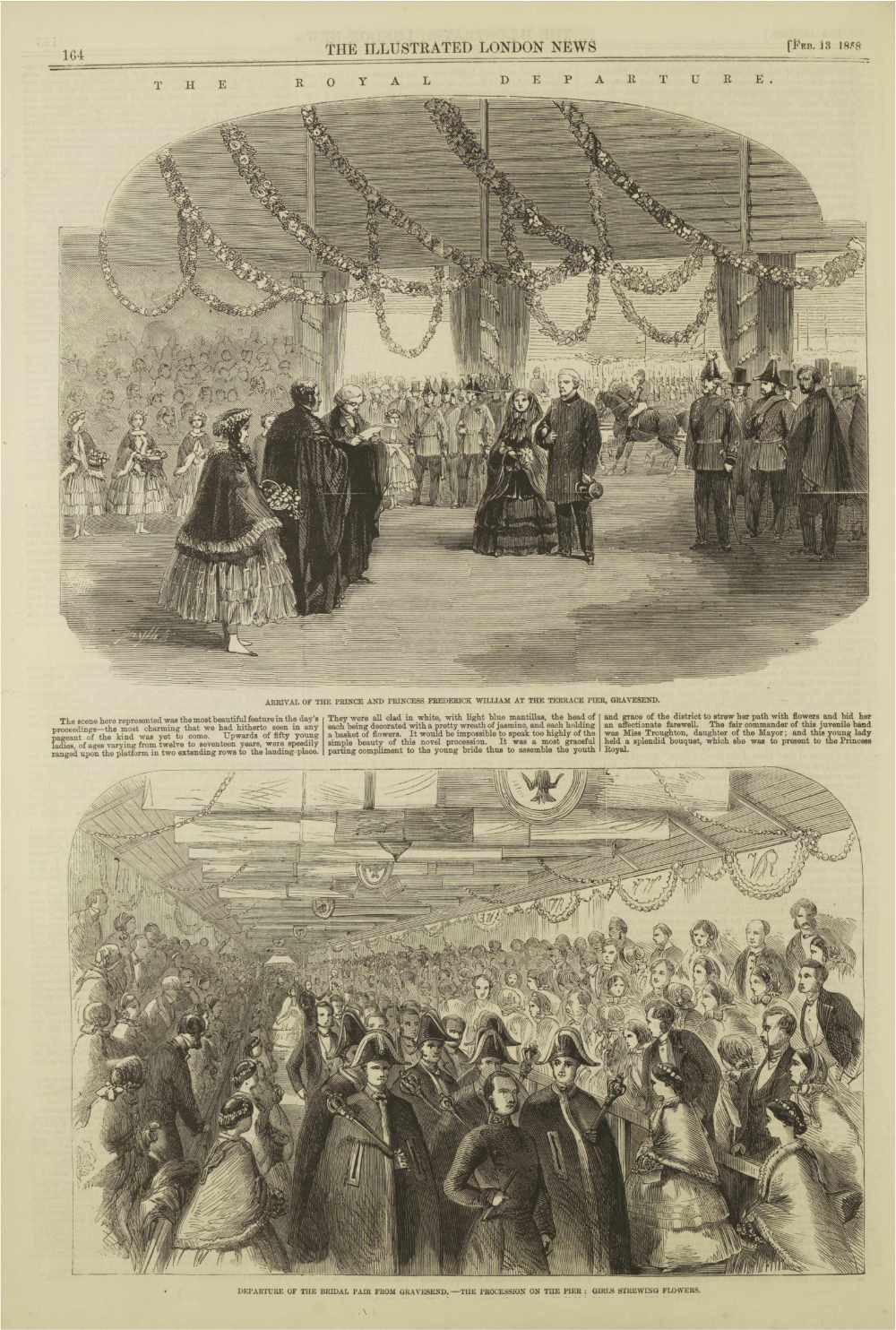 Frederick went on to become King of Prussia and Kaiser of the German Empire, and historians regard his poor health and eventual early death from smoking-related cancer as one of the reasons that war-hawk Bismark became so powerful in the German Empire. Bismark pushed Frederick into constant territorial wars that Frederick really didn’t want to participate in.

‘My’ page is the second page in a story about ‘The War In China’ – which is the Opium Wars. Here’s the first page of that story. 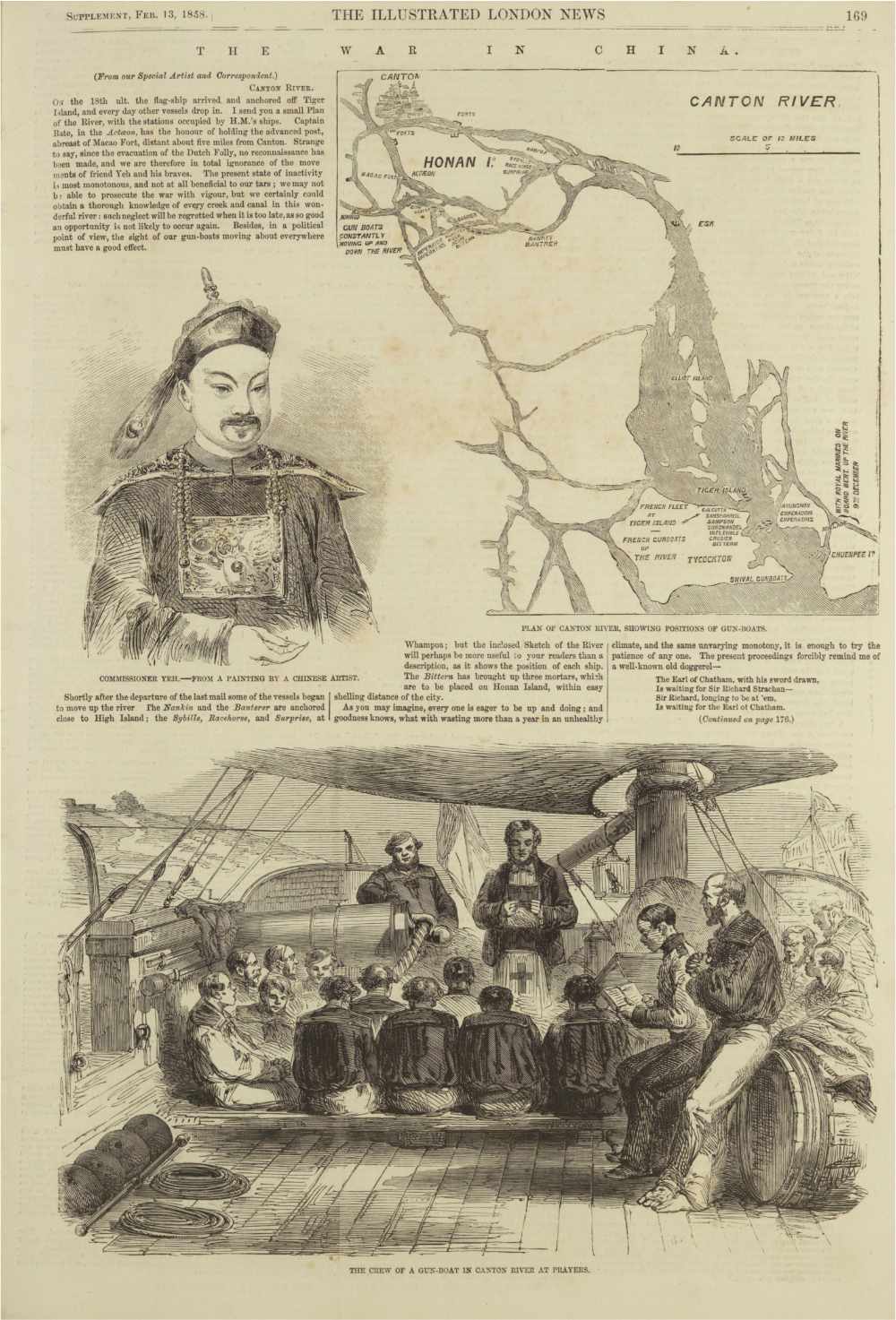 ‘Honan Island’ is Haizhu District, in the middle of Guangdong city, and this is what it looks like today: 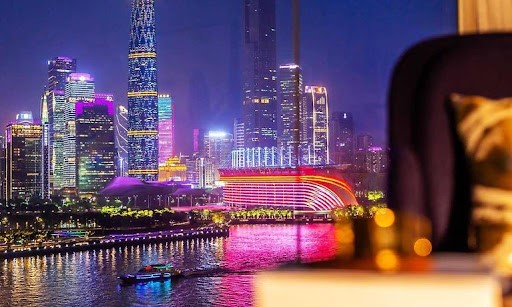 According to the I.L.N. report, there isn’t much of a war happening, they seem to be mostly prancing around playing band music.

After I put the newspaper page into the frame, I arranged for a print of my own photo, and the two pictures are now side-by-side in my hallway. 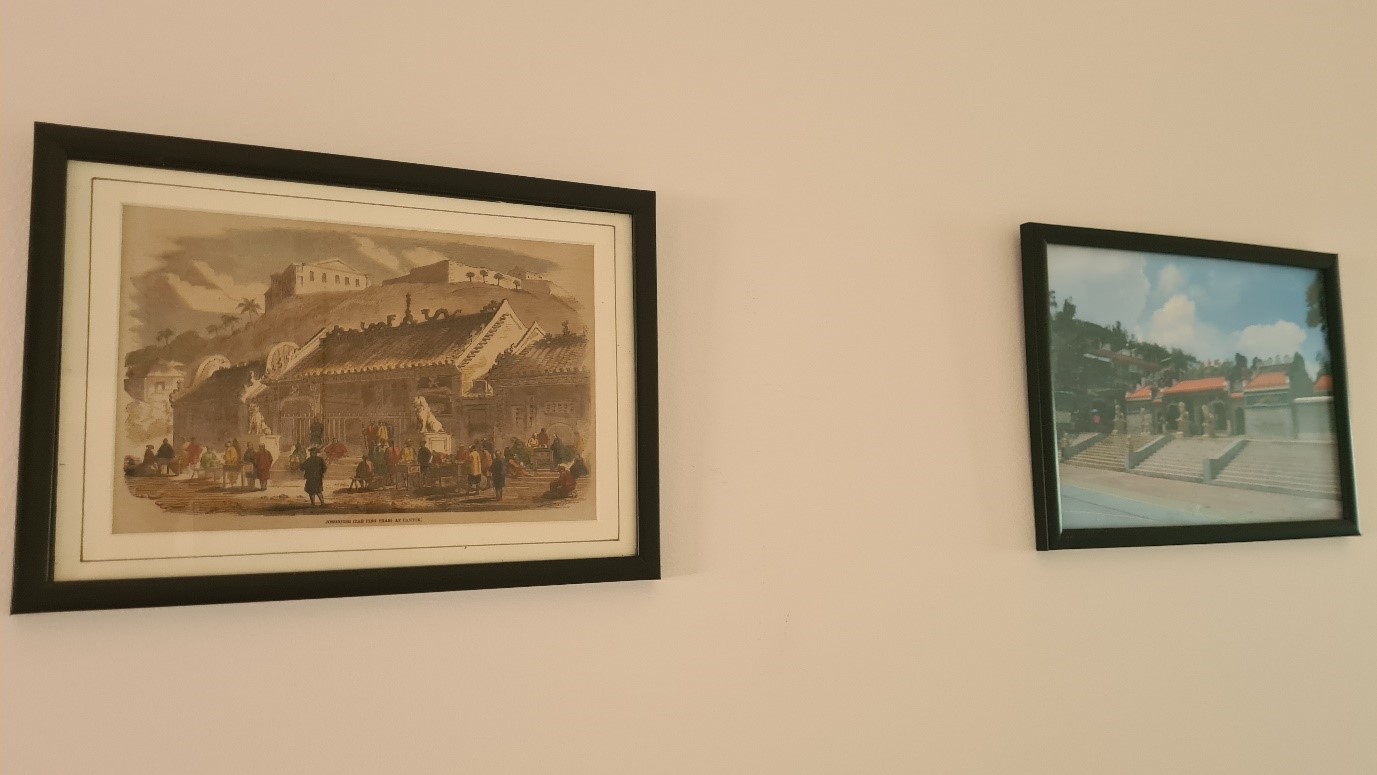 Disclaimer:
I have since found a photo of Man Mo Temple as it was in 1903 (thank you whoever this illegible postcard writer is): 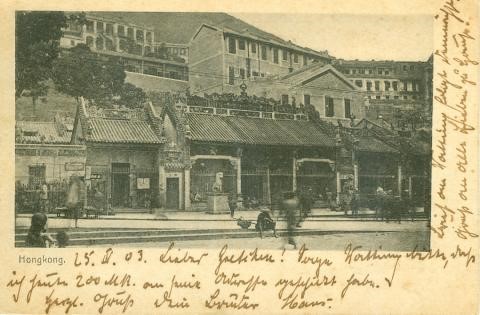 It looks like the temple was originally four buildings – the big one in the middle, a smaller one to the left, and two smaller ones to the right of it. The small building on the left has been eaten up by development since this photo was taken. It has a big fence in front, which Pak Tai doesn’t, but the etching does. 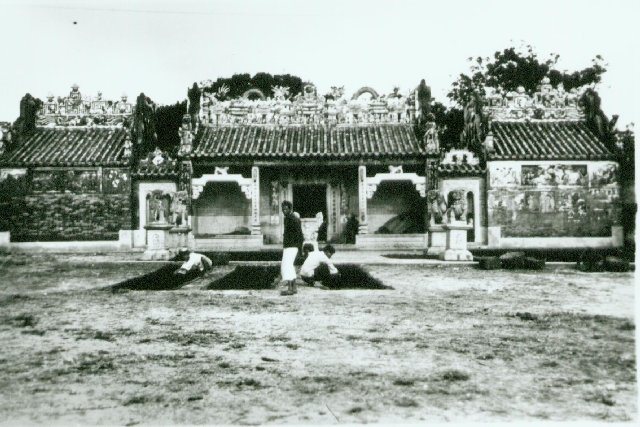 The resemblance is uncanny – both temples seem to be nearly identical.

So it’s possible that ‘my’ picture is Man Mo Temple after all, but I like to believe that the artist took a water taxi (with his ‘Sampan Girl with Teapot Hair’) over to Cheung Chau and drew the temple there.

I hope everyone has a wonderful break. Patrons have new ‘Dark Heavens’ and ‘Minds of Sand and Light’ to read, and as it’s already the silly season, I have no news or workshops happing to tell you about. So I hope you enjoyed my little story, and I’ll see you in 2022!