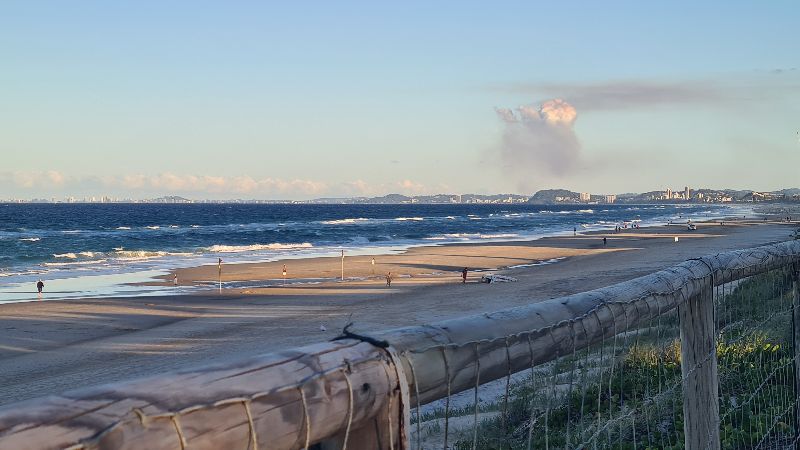 On clear winter days like this I can literally see into the next state. The high-rises on the peninsula at the far left are in Coolangatta, in New South Wales. If I walk 5km to the far north end of the beach, they disappear under the curve of the Earth (they’re about 20km away).

‘Minds of Sand and Light’

This is the title of the new cyberthriller, and I submitted it to a New York literary agent last week. It usually takes a few weeks for these things to process. This story has many of the same themes as ‘Dark Heavens’ – particularly the ‘powerful non-human man and extremely smart and brave woman’ trope, which in this case is an android and a brilliant hacker. There are many explosions. Watch this space and wish me luck.

Now that the cyberthriller is done, I’m back into Dark Heavens and putting together all the parts that I’ve been sharing on Patreon to start building our Dark Heavens sequel. When I wrote ‘White Tiger’ back in the early 2000’s, I had just moved back from Hong Kong and I hardly knew anyone. Now I have a bundle of friends both inside and outside the literary community who are all either helping or cheering and it feels really good.

This one is tough. I know how much everybody wants to see me (hell, the Patreon is so you can help me to visit you!)  but I’ve had issues with Supanova for years now that I haven’t detailed in public, and now it’s turned into a – there’s no other word for it – massive shitstorm. Supanova Sydney 2021 – these fashy assholes weren’t there to sell their crappy merchandise, they were there to recruit baby Nazis.

Here’s the Kotaku story about it.

The first Supanova boycott was when the owner brought over Adam Baldwin, the actor who was Jayne on ‘Firefly’ and who started Gamergate. As in, all women in the games industry are <insert misogyny here>. A couple of the staff resigned from Supanova in disgust.

After it became obvious that this wouldn’t blow over, Supanova posted a public apology that basically said: ‘we’ve let you down, we’re really sorry, we promise to do better, please forgive us, we really love you’ – and the community did forgive them and moved on.

The second Supanova boycott was when the owner posted a petition on Facebook to ban the ‘Safe Schools’ program, including a bunch of really ugly trans- and homo-phobia. This caused a furore on social media, and when it became obvious it would blow over… Supanova posted another public apology that basically said: ‘we’ve let you down, we’re really sorry, we promise to do better, please forgive us, we really love you’. And the community forgave them and moved on.

So Sydney Supanova happened on June 19-20, and this time the owner permitted a bunch of actual freaking Nazis who have been banned in the past to set up and stay for a day and a half before he finally folded to his own staff’s demands and had them booted. Not before they had plenty of time to harass anyone at the show who wasn’t ‘White’, though, making everyone extremely uncomfortable.

A lot of the most senior staff resigned (and respect to them for doing it).

After a week, it became obvious that it wouldn’t blow over so: yep, another apology, exactly the same wording, we’ve let you down, promise to do better, blah blah blah.

At this point I’m looking at it going: the community’s in an abusive relationship with Supanova and keeps going back every time they apologise.

Then when that didn’t work as well as the two previous times, the owner has ‘stepped down’ (but he still owns it) and his second-in-charge has ‘taken over’ and they have an ‘ethics committee’.

I don’t think they’ll change and I don’t want to be involved with Supanova any more. People are talking about starting alternative conventions and I would be delighted if there was an alternative; but in the meantime, Supanova, yeah no.

Which leaves Oz Comic-Con. I used to have an excellent relationship with the previous owners but that was two sets of owners ago and the current owners  have made it very clear that they want to focus on comics rather than fiction. They heavily curate their artist’s alley so only one in five applications get an alley table, and never two years in a row.

So: in future, when I have a new release (and I will have them!) I think I’ll just take myself to the capital cities and do signings in bookstores and let you guys know in the newsletter so that you can come and say hello, as well as doing the ‘Inconceivable’ online convention and selling signed books through the website. The Patreon is still immensely useful, I’ll use that fund to get myself around the country to visit all of you, when things reopen again.

I have my second Astra Zeneca vaccination in August, and Sydney needs to get itself together because I want to come and visit everyone!