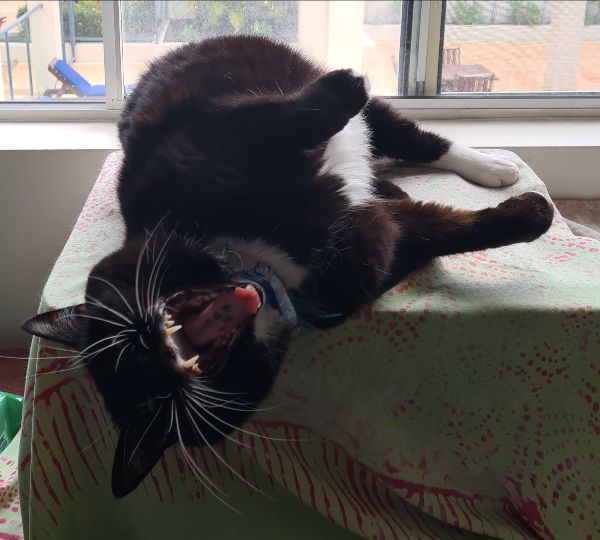 Inari’s COLD.
(That’s an old sarong on top of my inkjet printer so it doesn’t fill up with cat hair and become useless. So far it’s worked but I have to turn it off unless I’m using it – because she keeps banging the control panel with her cranky tail and printing test pages.)

My interview with Bettina Burger from Dusseldorf University is up on Spotify! The staff of the university had to divide it into two parts because, as usual, I talked too much. I went into detail about my plans for the next Dark Heavens (and made some really cheesy pop-culture references), and she was an absolute delight to talk to. You can check the interview out here:

I think the most interesting point to note about this is that these German universities are doing more research and showing more interest in Australian speculative fiction than we are here in Australia!

The cyberthriller that I’ve been working on is complete, and I’m nearly at the stage of sending it out to agents and publishers. Wish me luck! It’s called ‘Minds of Sand and Light’ and it’s a continuation of the short that I submitted to the Home Of The Arts Gold Coast’s ‘Rage Against The Virus’ grant program. I really enjoyed writing this one, and I hope it can find a home. An epilog popped up while I was writing it – and now I need to go to New Zealand to research for book 2.

Of course I’ve been working on a  new Dark Heavens story at the same time, and the working title for this one is ‘Serpent Empress’. Now that the situation in Hong Kong has been clarified (unfortunately, see my Twitter feed for political snark) I have a very good idea where this story needs to go. And it’s some very difficult places.

As I’m Officially Old, I’ve had access to the latest COVID vaccine stage, and I’ve had the first one. It was the Astra-Zaneca version, and it really knocked me flat afterwards! I get the second dose in August, and after that I’ll start exploring travel again. Hopefully as more of the population is vaccinated, we’ll see fewer border closures and I’ll have more access to conventions.

Just a note that Oz Comic-Con at this stage under new ownership are not looking for literary guests, and their artist’s alley is heavily curated – only one in five applications is accepted, and they have expressed a preference for not having the same guest in the alley twice in consecutive years as a matter of policy. I’ll just have to see what I am able to arrange.