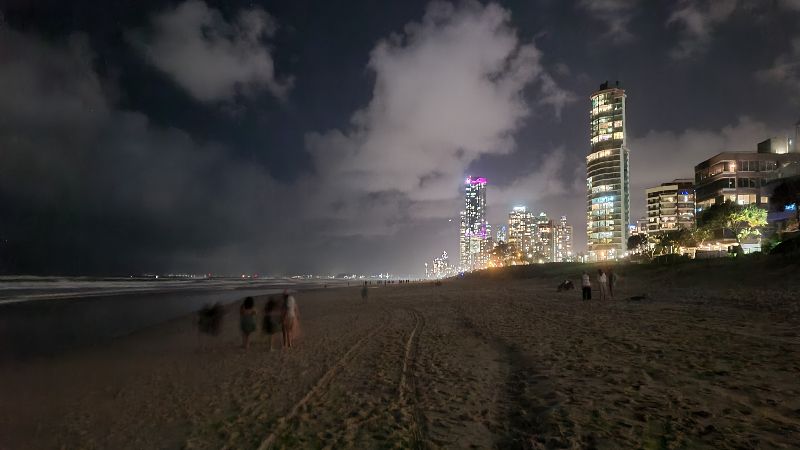 Happy New Year! I took this photo on the beach while I waited for the New Years Fireworks to start at Surfers Paradise

Minds of Sand and Light

We have a release date! ‘Minds’ will hit the shops on June 7. I haven’t seen it up for pre-order yet, but its ISBN will be 9781460763735, so you can search for that number on google and the book will come up. I’ve yet to receive early cover designs, but the interior is very close to done and will be finalised this week. Excitement!

I’ll share the cover image as soon as I have it. 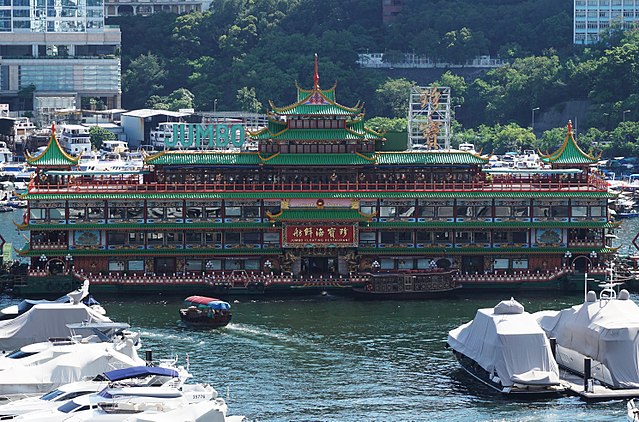 Since ‘Minds’ is close to complete, I have a little more time, so I’m back to digitising the home videos. Click on the image to go to my home movie of visiting Jumbo Restaurant in 1991.

Jumbo Floating Restaurant (also links to the movie) was the most Hong Kong thing ever. It was notorious for being overpriced, having awful food and terrible service, and being only good for tourists. I never went there once during the ten years we lived there.

When we visited Hong Kong in 1991 to see the family, they took us to Jumbo because they thought our three-year-old son would enjoy the experience. He loved it. The food was terrible and the service was awful, but that didn’t matter. We had a great time.

Things to look out for on the home movie:

– We rode the free shuttle boat, which was decorated in matching style, through the Aberdeen Typhoon Shelter. Jumbo was in the middle of it. ‘Typhoon Shelter’ isn’t really an accurate name for it: the shelters are a combined marina for fishing and leisure boats, as well as permanent moorings for people who live on boats. There are a number of them around the territory. 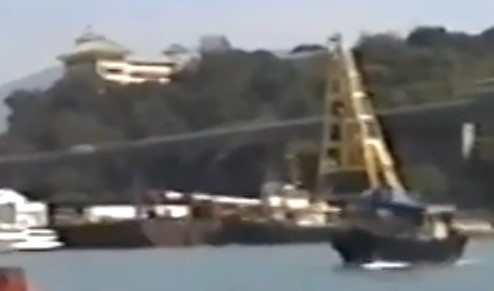 These used to be common around Hong Kong harbour, and there are still some that carry freight from smaller, non-container, carriers. They are barges with cranes (the towers) on them, that lift cargo from ships and carry it to the shore. With modern container shipping they’re becoming obsolete, but cargo used to be held in nets and hoisted by these boats.

– The aqua coloured square buildings at the back of the restaurants are the kitchens. They capsized in June 2022 (what a coincidence considering what comes just a couple of months later!). There’s a story about the kitchens in the Hong Kong Standard, but this news was quickly overshadowed by the restaurant’s final fate.

– We sail past the ‘Tai Pak’ restaurant barge which was parked next to Jumbo. During its heyday, It was ‘Jumbo Kingdom’ and had three restaurant barges joined together: Jumbo in the middle, Tai Pak on the right, and Sea Palace on the left. It really did have a sign saying ‘Theme Park on the Sea’. They’re all gone now.

– My son loved the dragon fountain out the front of the boat. That’s not mist in the video, that’s fumes from the shuttle boat’s awful diesel engine.

Jumbo, Tai Pak and Sea Palace were something of an institution. All package tours would include a lunch on the barges, mostly for the photo ops (the food was always terrible). But they were built in the 70’s and maintenance was sporadic at best. The government kept tightening regulations and demanding higher mooring and licensing fees, and the owners sold Tai Pak and Sea Palace, leaving Jumbo by itself, degenerating and faded. It required a massive amount of maintenance under dry dock to stay safely operational – and there wasn’t anywhere that would handle a barge of this size, and the cost would be enormous.

When COVID hit and the tour groups stopped, it hit the restaurant hard. The owners were paying a fortune in maintenance and mooring fees, it was falling apart, and it wasn’t earning anything. Everybody knows what really happened, but the official story is this:

The kitchens accidentally took on water and capsized in June of 2022, but fortunately the rest of Jumbo was miraculously undamaged.
In August of 2022, Jumbo was sold to parties unknown and was towed to Cambodia where it was going to be welcomed and loved and refurbished. It hit rough seas, ran into a reef and sank.
When accused of sinking it for the insurance money, the owners pointed out that it wasn’t insured and they’d lost everything.

Jumbo was something that was just there, and I never considered that there would a time that my little home movie would be a thing of history. I used it as a setting in Dark Heavens because it was such an icon, and the description of the two tour groups heading across the typhoon shelter – Chinese and Western – is accurate and from experience.

I asked my son how much he remembered of our visit there, and he bashfully said, ‘None of it.’