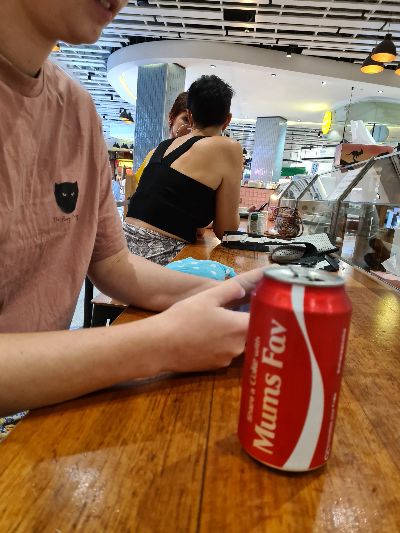 My daughter came up from Sydney to visit when border restrictions were eased. We went for Hakataya Ramen in Pacific Fair and the staff there picked us.
(Disclaimer: SHE IS NOT MY FAV I LOVE BOTH MY CHILDREN EQUALLY HOW COULD YOU DO THIS COKE OMG)

February was a month of staying-home-and-writing. The most interesting thing that happened was that my daughter visited and we ate food and she helped me with some random maintenance around the house (new, tougher insect screens because the cats are destructive monsters).

It feels strange to be working on two projects concurrently – the Zheng story and a new John/Emma story are both growing and being a shut-in has helped the creativity enormously. I’ve posted updates to both stories on my Patreon, and I hope the patrons enjoy the Jade Emperor’s interactions with our new Serpent Empress!

Book Three of Dragon Empire, ‘Dawn of Empire’, is now out in the US/Rest of the world. Audiobooks of the series have also been released world-wide. I’ve already received emails asking for more of the Jian/Miko/Haruka story! Thanks so much for enjoying it. I needed the break from Dark Heavens and it’s good to be back to writing John/Emma again.

Conventions appear to be restarting, and the Oz-ComicCon popup event in Sydney was a (qualified) success. I suppose it’s time for me to start thinking about appearances at cons later this year. Oz Comic-Con are under new management so I don’t have the good relationship with them that I developed with the previous owners (who were wonderful). So I’m working out costs (tables at both conventions are insanely expensive when you’re not a “guest”) and hopefully I’ll be able to do some book signings at cons this year. I definitely want to wait until the vaccine has been completely rolled out, though.

Stay safe everyone, and I hope the Patrons enjoy the John/Emma update. Both this story and the Zheng story are going great places!