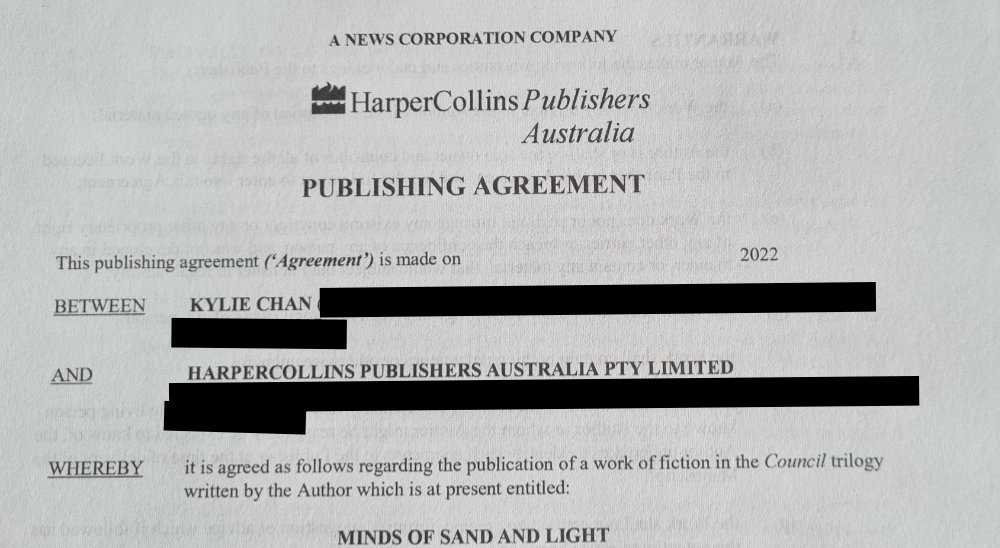 It’s my thirteenth novel and it feels like my first. Due out mid-next year.

As you can see from the pic above, Harper-Collins have contracted to purchase ‘Minds of Sand and Light’ for Australian release in the middle of next year.

Here’s a quick sample of some of the things that the editor had to say about it:
‘I adore Ruth (the main character) – she is so clever and wise’
‘I have a serious crush on the lovely Theo (the android)’
‘Accessible and relevant, while maintaining your trademark wild imagination and playfulness’
‘(Zheng’s story is) phenomenal stuff, really moving’

Many thanks to all the Patrons who helped to get me there, and do not despair! Because the Dark Heavens spinoff (that Patrons have been reading) is nearly done, and I will be releasing that one soon. High-level Patrons will all receive a free copy of it to thank them for their support.

I’ve posted new Dark Heavens and continued the samples of ‘Minds’ on the Patreon. It looks like I’ll very soon have to stop posting ‘Minds of Sand and Light’ there, and start with book two – ‘Bodies of Stone and Water’. I’m having a blast writing that one as well!

In the spinoff, I have Simone and Michael heading to Europe to deal with an invasion in Eastern Europe.

… Sometimes I feel a little guilty about spending all my time doing something that’s so much fun.