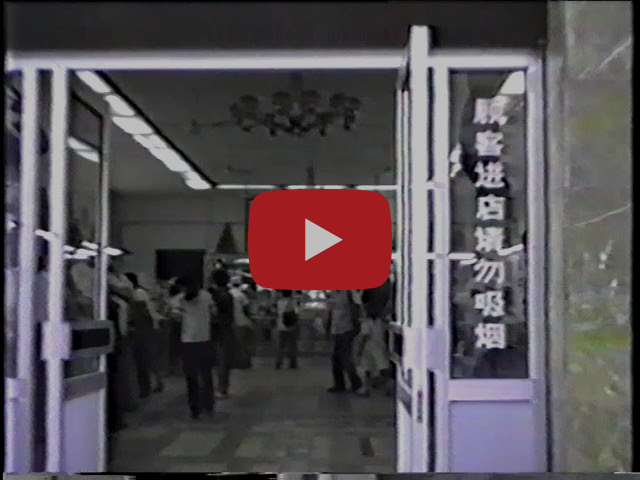 I finally worked out how to transcribe my VHS camera videos to digital. Here’s a Beijing street from 1986.

I’m working hard behind the scenes with the lovely Anna and Shannon from Harper-Collins to make ‘Minds of Sand and Light’ the best it can possibly be.

During some down-time while I waited for their decision on whether to publish the book, I finally worked out how to connect the ancient VHS player to a USB port on my computer, and transcribe the old VHS home movies. Many of them are of the kids being cute and won’t be shared, but some like the video above are fascinating.

In 1986, I’d been married to my husband for two years, and we went back to Hong Kong to visit the family. My father-in-law had wanted all his life to go to Beijing, so my husband arranged a tour for us. It was a ‘father-sons’ type thing with my husband, his brother and my FIL, with my MIL and SIL left at home (no comment), and I had to go along because they couldn’t really leave me behind with family members who spoke no English and very little Cantonese (they spoke Teochew dialect at home).

It was a HK tour group, and I was the only white person along (although there was a loud group of Chinese-Americans up the back of the bus visiting HK family and discovering their cultural roots). Unfortunately time has not been kind to the VHS videos, so most of them have messed-up colour like the one above, but it’s still a fascinating snapshot of life in China just after it opened up.

This is ‘the most famous medicine shop in China’ as my husband loudly proclaims. It’s so famous it features in Wuxia fictional stories, when a hero needs a miraculous cure for poisoning or demon bite or something, so it was a highlighted stop on the tour. Optional Immortality Pills at a special discount for all tourists.

My father-in-law then gestures to suggest that I go visit the store next door, which was packed to the ceiling with gorgeous Chinese silks. Note the way the shop attendant slides out of camera view, people in China and HK hate being filmed and the police used it as an intimidation tactic during the protests.

After we went to the medicine shop we went to a remarkable Beijing Acrobatics troupe (Chairman Mao cancelled all of the performing arts except for Beijing Opera and Acrobatics and it took a long time for them to recover) and my husband gleefully videoed the entire show without anyone making any sort of comment. It was so early in the introduction of home movie cameras (we’d just bought the camera in Hong Kong for the trip) that the concept of piracy was still unheard-of.

This is only a short snippet of the video, the rest of it is mostly us wandering around the Forbidden City and Temple of Heaven, but I hope you enjoy it. There’s another video on my Youtube channel that shows a street market outside a tourist attraction from the same tour, with a white American man looking suitably unimpressed by the items on offer.