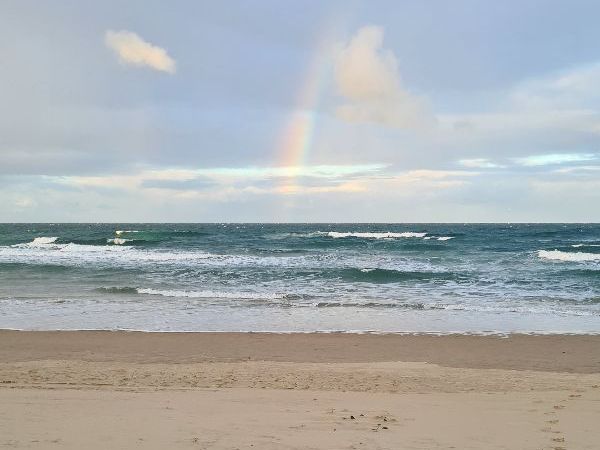 It’s not often a mid-winter rainbow appears above the surf. This one felt special.

I’ve been head-down working on two new works – one is the sequel to ‘Dark Heavens’ which I’m thinking will probably be called ‘Serpent Princess’ because it’s mostly Simone, trying to be ‘normal and happy’ and failing miserably. This one is two-thirds done and I’m doing my usual hard-left-turn plot twist and awful climactic denouement. My Patrons have been enjoying reading the messy creative process, and it’s starting to come together.

‘Minds of Sand and Light’ is still with Harper-Collins and I’m at the point where I’ll probably give up on them and self-publish it. Patrons have been reading this one as well.

Everybody who visited me at Adelaide Comic-Con (thanks guys!) had already bought everything I’ve written, and wanted something new. ‘Minds’ has been finished for nearly a year and it’s about time you had the chance to read it. It’s a whole heap of fun with a bunch of fantastic quirky characters.

I have no more appearances scheduled for now, but Oz Comic-Con Brisbane (yes again) and Sydney will be happening in September, so hopefully I’ll be there and have something new for you to read!

Massive thanks to the Patrons for their support while I put these two novels together. I want to share them with you!