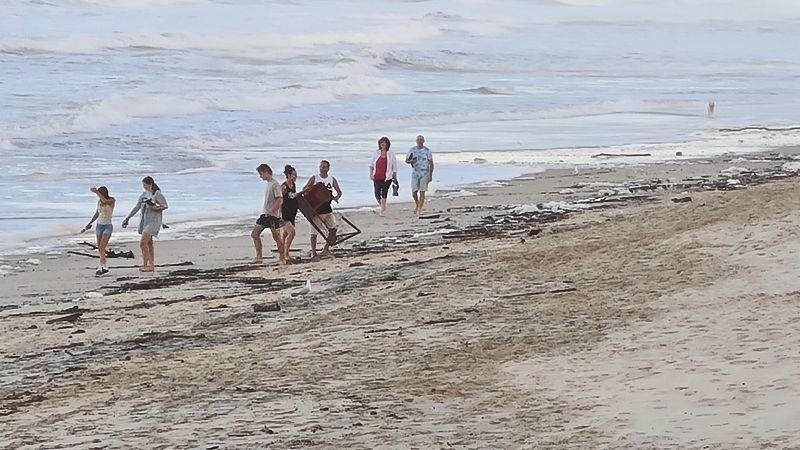 Aftermath of the floods – the beach was covered in debris. This cabinet could have been part of a boat? They pulled it out of the water because it had broken glass in it.

This month is going to be super busy for me! I have the Character Building workshop next weekend, and then Oz Comic-Con Brisbane the weekend after that.

I’ll be at Redcliffe Library on Saturday 19th March at 1.30, and you can use the link to register. The workshop is free, sponsored by Moreton Bay Libraries.

If you’re coming along to either of these, please be aware that my hair is darker than it is in the headshot photos: I’ve found a new salon in the Gold Coast and the colourist has been playing around with the colour, looking to give me more ‘depth’. At least the current shots look like me – the head shot in ‘White Tiger’ is nearly fifteen years old now!

My daughter left a great deal of stuff here in Queensland when she moved to Sydney, and she finally went through our storage unit and worked out which bits she didn’t need. This includes part of her comic collection! I’ll have a bin of comics and manga at Oz Comic-Con, selling for ‘whatever it takes to get rid of it’ prices. There are some original 80’s Wanda/Vision comics as well!

The team in the US have popped up with news again, and this time they’ve signed a major showrunner who did a fabulous adaptation of a famous book series to a TV series. He’s excited to be on board, and now we have the big name with us, it’ll be easier to rally studios to invest into it – we need a studio to fund it, and find a whole production team.

‘Minds of Sand and Light’, my new creative project, is currently with Harper-Collins and it just became extremely topical – it’s set in a future world where Russia is a vassal state of China, and is a propaganda-fuelled war machine storming through Eastern Europe. The last two weeks have made that outcome frighteningly plausible.

I’ll try not to think of that while I work on a sequel to ‘Dark Heavens’ and the second book in this series. And look forward to seeing my Brisbane friends at Comic-Con!